So yesterday, I went on a 23 mile ride with a colleague at work, and that put me over 1k miles for the year! Now, I realize that number is not much for many people, but I’ve never been even close before. I think last year I rode 650+, and the year before was probably even less.

With those 1k miles comes 71k feet of climbing. I wonder if those people that ride 5k-15k miles/year encounter an average of 70ft/mile of climb? Probably. Where do they get the time? Who knows! I know I’ll never average that much – due to sheer lack of free time – but I hope to keep going this year, even when in years past I’ve bowed out due to the cold. Maybe I’ll even get 1500 miles. Maybe not. Maybe next year. Either way, I’m proud of this achievement. 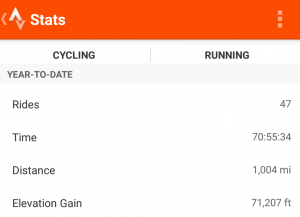